In the early twentieth century, artists in China and Korea gained exposure to Western art through studying abroad in Japan. As a result, Western art in China and Korea was often reinterpreted through the lens of Japanese art. Although China, Korea, and Japan have a long history of close relationships, they developed art in conjunction with each of their own cultures. I will examine ways in which artists from Japan, Korea and China adapted Western art within their particular national contexts circumstances by their works.

The main works displayed are dated from the late 19th century to the early 20th century by Japanese artist Kuroda Seiki (黒田清輝, 1866-1924), Chinese artist Li Shutong (李叔同, 1880-1942), and Korean artist Go Hui-dong (고희동, 1886-1965). Kuroda Seiki, a famous for master of Plein airism, was a professor of Western Painting department in Tokyo School of Fine Arts, and his philosophy of arts was reflected in Tokyo School of Fine Arts’ curriculum. Li Shutong and Go Huidong were the first international students in Japan, and learned Western painting from Kuroda Seiki. To trace the origin of Kuroda’s style, Pierre Puvis de Chavannes (1824-1898) and Louis Joseph Raphael Collin (1850-1916)’s paintings are displayed in this exhibition to compare their style and composition. Also, the paintings of Kim Kwan-ho (1890-1958), also a student of Kuroda, are included. The items are mainly focused on portrait, nude, and others to in order to examine how notions of Western artistic styles and representations of the body were explored within Japanese, Korean, and Chinese contexts. Also, discovering human bodies and the concept of self-examination are new emerging ideas in modern Asian countries -- enabling us to examine how early Asian artists represented new concepts through their paintings.
This site contains three exhibits: Kuroda Seiki and Western Painting, Nude Painting in Modern Asia, and Self Portrait. Kuroda Seiki and Western Paintings shows how Kuroda Seiki learned Western oil painting in France, and how he was affected by their French teachers. Also, the relationship between Kuroda Seiki and Tokyo School of Fine Arts, and school's curriculum made by Kuroda are examined. Nude Painting in Modern Asia illustrates the meaning of nude painting in the early twentieth century Asia, and how Kuroda's nude influenced other artists' paintings. Self Portrait explores the emerging meaning of self-portrait in modern Asia, and examines three artists' self portraits. In addition, self-portraits from graduates of Tokyo School of Fine Arts can be seen in this exhibit.

The ultimate goal of this project is to help build art historical connections among the East Asian countries of China, Korea, and Japan. Throughout the exhibitions, we can examine the three countries' modern art field macroscopically, as well as analyzing three artists microscopically. With reference to Doshin Sato's method of comparative analysis in Modern Japanese Art and the Meiji State, I will try to consider each figure as representative of national artistic trends within the period. According to Chelsea Foxwell, "Sato encouraged scholars to understand East Asian artistic exchange as a 'weather map' with fluid trends that move over the region regardless of national boundaries."[1] In this regard, researching Asian art history from both the 'outer view' and the 'inner view,' as well as studying artworks and artists with an integrated method is important. Kuan-hsing Chen, in his book Asia As A Method, highlights the importance of knowing Asian countries' distinct histories, and a synthesis of Asian history. Asian society can be integrated after knowing each particular context, and it can be a new method of Asian studies. In this context, I will continuously question if we can define Asian art history "as a method", and whether it is possible to establish a broader East Asian art history. 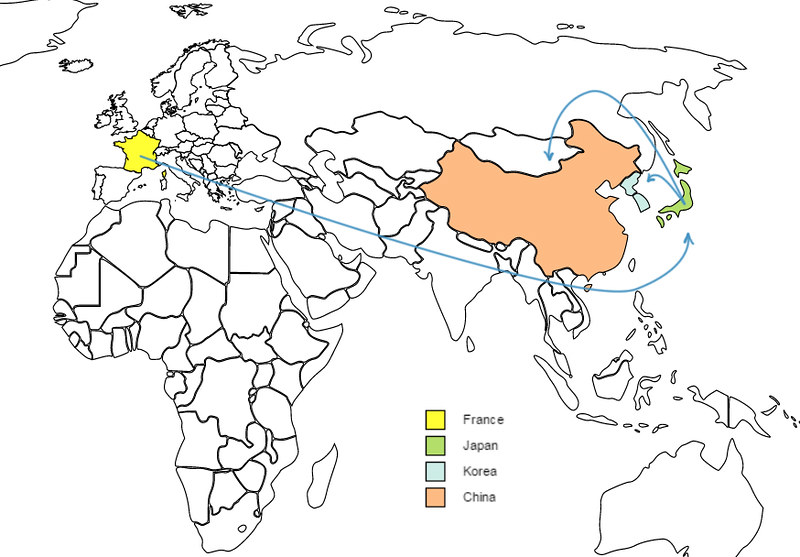